A broad ion beam is typically several centimeters or more in diameter. The beam diameter is also much larger than the Debye length, which is the typical distance an electric field can penetrate into a plasma. If a broad beam is to be kept near ground potential, it must be neutralized (see Tech. Note KRI-02). For neutralization, there must be approximately equal numbers of electrons and positively charged ions in each volume of the ion beam. For a dielectric target, the electrons and ions must arrive in equal numbers. The target can be either a sputter target or a substrate. The ion energy in a broad ion beam is 2000 eV or less. (A singly charged ion “falling” through a potential difference of 2000 V acquires an energy of 2000 eV.) To minimize damage, the energy is usually 1000 eV or less. High energy implanting-type applications are not consider-ed here. Concern about damage to processed surfaces has led to decreased ion energies. There are two general categories of broad-beam ion sources: gridded and gridless.

A schematic for a gridded ion source is shown in Fig. 1, in which a dc discharge is depicted. The ions are generated by a discharge in either a circular or elongated discharge chamber. Several types of electron-emitting cathodes can be used. A hot-filament type is shown in Fig. 1. The ions can also be generated with a rf discharge, which requires no electron emitting cathode. The discharge chamber is maintained at a positive potential by the beam supply. The ions are accelerated through the apertures in the screen and accelerator grids, which are together called the ion optics.

Different grid configurations can be used. The two-grid optics shown are most common. With a dc discharge, the screen grid is close to cathode potential. With a rf discharge, the screen is connected to the positive terminal of the beam supply. Positive ions are accelerated from the positive discharge chamber, through the ion optics, to reach a target at near-ground potential. The accelerator grid is negative of the surrounding vacuum chamber (at ground) to keep electrons from the neutralizer from going backwards through the ion optics. Assuming singly charged ions, which are appropriate for this type of ion source when properly operated, the ions gain an energy in eV (electron-volts) equal to the beam-supply voltage in V. 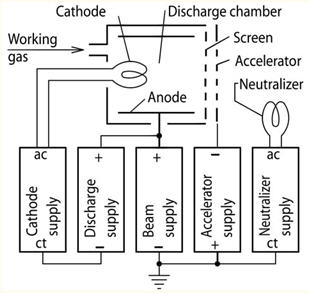 Gridded ion sources operate at background pressures of about

0.5 milliTorr or less. The ion-beam output depends on the ion-optics design. The beam current increases as the grids are spaced more closely and the number of apertures is increased. The ion beam can be focused to cover a small area, collimated, or defocused to cover a larger area, depending upon the shape of the grids and the relative locations of the apertures in the grids. For given ion optics,the ion-beam current, Ib, depends on the total potential difference between the grids.

Proportionality (1) shows that the ion-beam current decreases sharply at low voltages. It may appear that a large ion-beam current can be obtained at a low beam voltage by increasing the negative accelerator voltage. But a large negative voltage can result in the ion beam spreading out so much that the ion current arriving at the target is actually decreased. Three-grid optics can reduce the beam spread at large negative voltages, but with limited effectiveness and other compromises.

There are many types of gridless ion sources [2,3], but only the end-Hall and anode-layer are common in industry. The ions in a gridless source are generated by the discharge supply, with the accelerating potential difference produced by electrons from the cathode-neutralizer crossing magnetic-field lines (not shown) to reach the anode.

An end-Hall ion source [2,4] is shown in Fig. 2. It has a discharge chamber that is circular or elongated. The acceleration of ions takes place in a quasi-neutral plasma, with approximately equal densities of electrons and ions. Consequently there is no limitation on ion-beam current, Ib, as expressed in Proportionality (1). The ion beam equals about 20-30% of the discharge current and the mean ion energy corresponds to about 60-70% of the discharge voltage. An end-Hallionsourceoperatesatabackgroundpressureofabout one milliTorr or less. Compared to a gridded ion source, it is reliable and rugged. It can generate large ion-beam currents at ion energies of 200 eV or less. It cannot easily generate higher ion energies and the ion-beam profile is limited to a divergent shape.

the vacuum mode, as shown by the absence of a cathode-neutralizer [3]. The discharge voltage ranges from about 800-2000 V. The ion energies are higher than for an end-Hall ion source. This type of ion source also operates at a background pressure of several milliTorr or less [5]. The ion beam potential must be elevated to obtain neutralizing electrons from the surroundings, thus exposing the target to high electric fields and, for dielectric targets, high potentials. Target damage can therefore be a concern. Coatings on, or warping of, the pole pieces and anode can degrade performance. However, if this type of source can perform an application in a satisfactory manner, it is a very simple type of ion source.